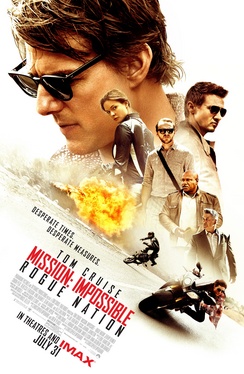 You know you're getting old when you start to measure the passage of time in terms of films in a franchise. I'm not talking about something generational like Star Wars which could, theoretically, span three generations with this year's release of Star Wars: The Force Awakens, but rather the Mission: Impossible franchise.

When Tom Cruise first dangled off that cliff as Ethan Hunt in 1996, I was finishing up my junior year in college and I was on the precipice of my adult life. When Mission: Impossible 2 debuted, I was actually working for Paramount at the time and kept busy with work in the midst of my first divorce.

So, you could say that I have a strange connection with this franchise and you better believe that I was going to be there opening weekend. Mission: Impossible Rogue Nation is everything that is great about the franchise with a touch of the silliness that sets it apart from similar action series. The film is a great summer popcorn flick that keeps the pace going even if it does feel about 20 minutes too long. But, I'm never going to complain with an extra 20 minutes of action in air conditioning on a hot summer day.

Not to bury the lede, but it appears that I wasn't the only one who enjoyed Mission: Impossible Rogue Nation this weekend.

While nothing has been officially announced from Paramount, Tom Cruise has mentioned recently during his late night circuit for Mission: Impossible Rogue Nation that the sixth Mission: Impossible movie is being developed and is eyeing a late July 2017 release, which would put it up against the first Marvel Spider-Man film. This really shouldn't be too surprising as this strong opening should help propel Rogue Nation to the highest box office gross in the Mission: Impossible franchise. The film is looking to end up with about $225 million.

This week's other new wide release was the reboot/sequel Vacation. While the trailers were on point and actually piqued my interest, it would appear that all of the good bits were culled for the trailer. The critics piled on while audiences have been a bit more receptive to the film, perhaps thanks to the nostalgia of seeing Chevy Chase reprise his role of Clark Griswold.

The hard part of following up such a ground-breaking film such as National Lampoon's Vacation is that no matter how good it is on its own merits, it will always be held up in comparison to the original film. They say that imitation is the highest form of flattery and in that vein, National Lampoon's Vacation has spawned so many copycats in the intervening years that a pure sequel/reboot seems a lot like something that has been done a million times over.

Vacation opened on Wednesday and brought in $21.2 million which isn't so bad on face value, but Warner Bros. was aiming for an opening closer to $40 million. When it's all said and done, the film should end up with about $75 million.

As the bottom to her top of a human pyramid of awesomeness.

Yep, life is good as a celebrity.

As you can see, almost everything that made the first film a classic is right here in the original story.

We're here on the set of #Goon2. Looking forward to talking with writer and director @BaruchelNDG soon! pic.twitter.com/wSXjBY6tuf