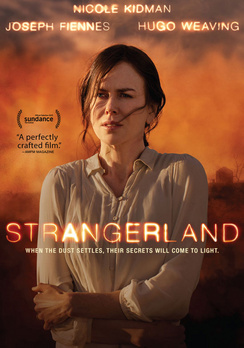 This week we have yet another interesting mix of options for your viewing pleasure. I think one of the more interesting things about the period of home entertainment that we currently find ourselves in is just how accessible good films are to both make and view.

Case in point, this week I'm highlighting films starring Glenn Close and Nicole Kidman. At one point, these huge actresses would normally only be seen in huge Hollywood films, but now they can both do massive films and smaller independent fare. The result is that great actors are bringing their talents to films that normally wouldn't get to benefit from their expertise.

Don't worry, there are still plenty of true independent gems in the mix, but it's all about raising the water level for all films. I think you'll agree that these films are a great mix of different genres.

As always, please let me know what I got right and which gems I might have missed.

The French are just so forward-thinking when it comes to life and love, so the premise of this movie shouldn't really shock anyone, but it will. Apparently, within the framework of traditional marriage, partners have carved out two hours a day to spend with their lovers. This is the story of a young American who falls for a married French woman with kids and how this completely foreign concept of romance affects his life. As you might predict, the young American, played by Anton Yelchin, desires more than two hours a day and things go off the rails. The cast is top notch and the story will certainly make you think about everything that we've come to accept about love and life.

While this film probably won't spawn as classic of a line as "a dingo ate my baby," the idea of Australia and missing kids seems to always bring that other film to mind. Here though, the story is a true mystery with a dust storm playing as much of a character as anyone else in the film. Again, I'll watch anything with Nicole Kidman in it, so sign me up.

One documentary that I enjoyed in the last five years or so was Room 237. This time director Rodney Ascher is back with a more horrific take on the genre. There are only a few things that scare the you-know-what out of me and that's sleep paralysis. The idea of being a prisoner trapped in your body is one of my greatest fears and I blame Tales from the Crypt and one episode where a guy was given a paralyzing agent and had to experience his autopsy without being able to move. Oh man, I still get the chills on that one.

Stories about spoiled rich kids who get their comeuppance are a dime a dozen in Hollywood, but a few are really well-made and should be seen. This seems like one of those films. If you liked The Skulls, Suicide Kings or Very Bad Things, you'll see a lot of echoes of those films in The Riot Club. A great young cast highlighted by Sam Claflin and Natalie Dormer prove that they are going to have long and celebrated acting careers.

I didn't grow up as a fan of The Who, but I did get into them later on in life thanks to my obsession with Pearl Jam. The more I listen to The Who, the more I appreciate their music and their influence on all of the music that laid the groundwork. So, this film piques my curiosity because I find this bizarre true story of the two managers of The Who to be fascinating.

The Secret Life of Marilyn Monroe

There are a ton Marilyn Monroe films out there, but few with a cast as talented as this one. Kelli Garner plays the tragic icon and we are given a look at her fragile mental state and her relationship with her mother that usually only gets a quick treatment from other films. Susan Sarandon stars as Gladys Pearl Baker, Marilyn's mother, who suffered from her own mental instability. So, it looks like this film will give us a look at the sex symbol that not many people have seen before.