Does Marvel owe all of its film success to Kevin Smith? 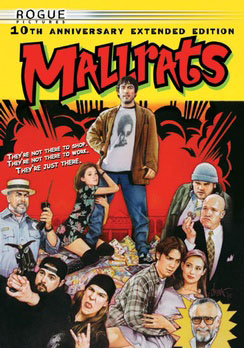 I'm sure you clicked on this headline expecting to unleash upon me all of the pent up vitriol that you have for click-bait articles, but I promise there is real substance to my argument. As we all know, there is no greater force in film these days than the Marvel Cinematic Universe (MCU). Well, the original purveyors of the Force might have something to say about that when Star Wars: The Force Awakens opens up later this year, but for now the MCU is hands down at the pinnacle of film franchises.

Six of their films have surpassed $300 million in domestic box office earnings, landing themselves on the all-time top 50 list of domestic earners. What is even more impressive is that the franchise has avoided the dreaded "bomb" as all eleven of their films released in the MCU era* have earned over $175 million at the box office. With 10 more films due to be released over the next four years, there doesn't appear to be an end in sight either.

So, can we really trace all of this success back to Kevin Smith? Yes, I think so.

Long before the MCU ever existed, long before Al Gore invented the Internet, there was this little film called Clerks that debuted in theaters on October 19, 1994. Kevin Smith was a massive comic book fan, who actually sold his entire collection of comics to finance Clerks (don't worry, he now owns a comic book store and I hear he's doing OK). The idea of a shared universe was one that long enjoyed success in comics with characters and arcs often jumping around from book to book and title to title.

It made perfect sense in the relatively low-risk format of comic books and it paid off handsomely for heavy hitters Marvel and DC (I know what you're going to say, but hold on a minute), but up to the early 1990s, that approach hadn't really gotten much traction in films. Sure, there were sequels and characters ala Abbott & Costello that popped up in multiple films, but creating a thriving movie universe where multiple films played out with some character overlap wasn't really a thing yet.

And sure, you could argue that John Hughes created something similar with Shermer, Illinois, but that was less a universe than a fully functional universe where characters intermingled and referenced each other and shared events. Duckie never name drops his bud Ferris Bueller or his Uncle Buck or anything. Shermer, Illinois was a necessary construct in which he set his films, presumably to avoid litigation and probably at the behest of lawyers. The View Askewniverse was such a driving force in Kevin's films that it became a character in the films, TV series and comics that followed.

If you're sitting there thinking that Quentin Tarantino beat Smith to the punch, I will give you that one. But again, the universe that Quentin has created is almost simply an Easter egg for his most ardent fans. The average moviegoer probably doesn't realize that Vic and Vincent Vega are brothers or that Alabama Worley gets name-checked in Reservoir Dogs. I could be forgetting something and if so, please let me know, but I'm pretty sure that the View Askewniverse is the earliest film equivalent to the MCU.

Much like the MCU, the View Askewniverse has connected solitary films such as Clerks, Mallrats and Dogma with sequels (Clerks II), television projects (Clerks Uncensored, Jay & Silent Bob Do Degrassi) and comic books. What's more, the View Askewniverse also has its own Avengers-esque team up film in Jay and Silent Bob Strike Back where all the heroes show up to battle injustice.

I know that some of you above probably jumped to the conclusion that if Marvel was using a shared universe in comics that it makes sense that they simply adopted it to their burgeoning film division. Sure, that might be the simple explanation, but we shouldn't forget who blazed the trail (pun most certainly intended). At a microscopic level (when compared to the MCU), Kevin Smith proved that a living cinematic universe was possible and sustainable. He showed that you can cultivate a rabid fan base and turn them into consumers of not just films, but of podcasts, merchandise, live shows and whatever else the man has come up with this week.

The kicker is that with his second film Mallrats, Kevin Smith helped to bring comic books back into the mainstream. I'm certainly not going to argue that he single-handedly made comic books relevant again, but he definitely helped to introduce comic books to a lost generation (myself included) who grew up in the 1980s and were more interested in Star Wars than comic books. In fact, I have no shame in admitting that I first discovered the X-Men and Wolverine and his Adamantium claws from watching Mallrats.

I can also tell you as someone who worked in a video store when Mallrats came out that I wasn't the only one that fell in love with that film. Mallrats remained on our new release wall for like three years because we could never keep it in stock.

When Marvel embarked on the MCU back in 2008 many claimed that they were taking a huge risk, but it was just an economy of scale risk. Kevin Smith proved that the model could work, Marvel just took the risk and we all know that they proved it could work on a much, much larger scale.

So, perhaps when Kevin Smith gets around to making Jay and Silent Bob Strike Back 2, the stoner duo will again make their way to Hollywood. This time though, they will target Marvel to get some of that phat movie money that they are most certainly deserved. Maybe Kevin Smith doesn't deserve all of the credit for Marvel's success, but I think he could have a legitimate claim to 37% of the credit.