Monday Mixer: 'Ride Along 2' is now a trivia answer 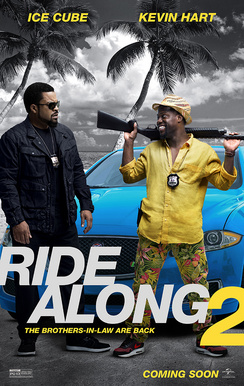 Cancer is evil, we all know that and no words of mine can change that fact. If last week's David Bowie news wasn't bad enough, this week saw the unexpected passing of iconic actor Alan Rickman. Tim made a good point on Twitter in the wake of his passing. You can pretty much pinpoint someone's age by the role in which they remember Rickman by.

For old folks like us, it's Hans Gruber in Die Hard. If you're a little younger, it's probably Dr. Lazarus from Galaxy Quest. Everyone under 25 will instantly recognize him as Severus Snape from the Harry Potter films, but for me, he will always be Metatron from Dogma.

E.T. is breaking out the champagne this morning as its record for the most weekends at #1 (16) is safe. It is one of the very few records that The Force Awakens does not possess. Also, it's a record that will most likely stay intact forever given the change in the way movies are released.

Don't shed any tears for The Force Awakens though because it has over 851 million reasons to be happy this morning.

Back to this weekend, Ride Along 2 took the top spot with $34 million which was a little less than the original film's opening haul of $48.6, but still an impressive feat nonetheless. I've never really understood the drawing power of Kevin Hart, but the results speak for themselves. Ride Along 2 is the sixth film in a row that Hart opened to over $20 million.

Ride Along finished with $134.1 million and the sequel looks to end its run right around $100 million.

In second place, Leonardo DiCaprio's The Revenant held on with a wonderful hold, dropping only 26% from its first wide weekend of release. The Revenant took in $29.1 million to bring its total up to $87.7 million. Given the bump from the Oscar noms, the film doesn't look like it will lose steam anytime soon. I wouldn't be surprised to see it end up with $160 million.

The Michael Bay Benghazi film 13 Hours: The Secret Soldiers of Benghazi opened in fourth place with a slightly less than anticipated $16 million. It remains to be seen if the film will be as politically charged as it was expected to be last year when its release was announced, but the film looks like it will end its run with $55 million or so.

The only other new wide release this weekend was the animated film Norm of the North. The Rob Schneider voiced film ended up with a better than expected take of $6.7 million. The film should crawl to $20 million which will be considered a big win for this small film.

Why are these things only in London? Related, I need to win the lottery so I can go to London every year.

Money Monster will debut in theaters on May 13.

This time, John Wayne does not mixer off into the sunset with Grace Kelly.