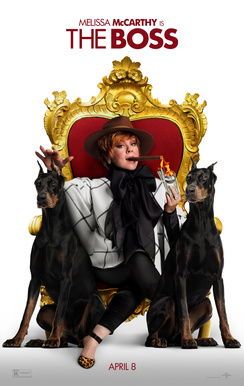 What exactly are the MTV Movie Awards? It seems that no one has any clue and yet, they still give them out.

They are basically a glorified marketing gimmick aimed at promoting Summer blockbusters under the guise of giving out awards for such dubious honors as "Best Kiss" and "Best Villain." At least they didn't give the award for "Best True Story" to Jurassic World.

So, what did we learn from this year's installment of "the awards show for movies that you actually see"? Well, not much. Apparently, Amy Poehler is better animated and Daisy Ridley was the breakout performer of the year (duh).

But, I'm getting ahead of myself. We need to talk about this weekend's performance at the box office first.

Melissa McCarthy's new film The Boss eked out a slim victory at the box office with its opening number of $23.48 million. That was just a whisker higher than Batman v Superman: Dawn of Justice's estimated $23.44 million. So yeah, these two could very easily flip flop when it's all said and done.

But for now, at least, the bragging rights go to Universal and The Boss. For Melissa McCarthy, it's another $20 million+ opener, her sixth since 2011's Bridesmaids and this should cement her place as bonafide box office draw, if there were any doubts at this point. It remains to be seen though if she can maintain that big opening. She's been rather hit and miss with the longevity and this one is looking like a miss.

It's a good bet that The Boss will fall short of $100 million, ending with somewhere around $85 million when all of the dollars are counted.

Batman v Superman: Dawn of Justice bested Zootopia again and has now seen its cumulative total surpass that of Zootopia as well. Both films are on the cusp of $300 million and should cross that threshold mid-week. Batman v Superman should continue its ascent, with little competition in the acton department until Captain America: Civil War comes out next month. I could see Batman v Superman flirted with $400 million, but ultimately, I think it ends up just short at $380 or so.

Zootopia should finish with a strong $350 million, which is another solid performance from Disney animation.

Hardcore Henry was the other big new release this weekend and let's just say that the gamer film failed to live up to modest expectations. By opening up on over 3,000 screens, the action film should have easily surpassed $10 million, but the first-person perspective film failed to deliver, settling for just $5.1 million.

Hardcore Henry was an experiment of sorts, an attempt to bridge films with the lucrative first-person shooter video game phenomenon. If the box office results are any indication, this experiment failed. I'll be honest, I just didn't see the allure of this type of film, but that might be the nausea speaking. I have the same reaction to virtual reality and 3D rides.

But to each their own, does this type of film appeal to you? At this point, Hardcore Henry will struggle to make it to $20 million.

There were some great new trailers and clips shown during the show for the Summer's biggest films and I'll do my best to get them on the site as they become available.

A long time ago (last week I think) In a galaxy far, far way(@PinewoodStudios ) THIS happened! Happy Birthday Daisy! pic.twitter.com/dYc9j65YBD