Review: 'The Jungle Book' knocks it out of the jungle 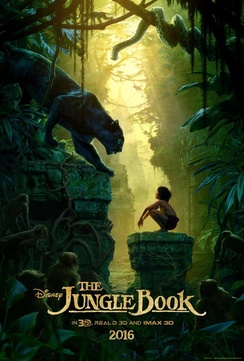 I haven't heard much lately about Andy Serkis' Jungle Book adaptation, but after Disney's live-action/CGI remake of The Jungle Book, the competition might be over before it even begins. That is how impressive Jon Favreau's take on the classic Rudyard Kipling tale is.

I sat down this weekend with both of my kids and we watched The Jungle Book in one sitting. Now, this wouldn't normally be newsworthy for adults, but my daughter is four and my son just turned three, so for both of them to sit through almost two hours of non-animated entertainment, well, we might as well call Guinness. As in the book of world records, not the beer, but if you happen to get them on the line, send me some, will ya?

My kids have yet to watch the classic 1967 animated Disney film adaptation of the story because for some reason I don't own it. I realize that this is a glaring hole in my collection and one that could jeopardize my run for "Father of the Year," but what can I say? It's an oversight and one that I hope to address in the near future. So, the kids came into the film pretty cold in terms of the whole story, but they absolutely loved it. Well, once they got past the whole talking animals thing.

If ever there was a ringing endorsement for the CGI of a film, it's this: they were able to trick my kids into believing that animals could talk. They were a bit ticked that we hadn't shared this secret with them before and they kept trying to get the family dog to answer their queries to no avail. Finally, we were able to explain to them that no, animals do not, in fact, speak in any sort of human language and they settled in for the film.

We all marveled at the glorious presentation of the jungle scenes which seemed to leap off the screen at times. I'm sure the visuals were helped a bit by the upconvert capabilities of my 4K UHD Blu-ray player, but still, they were amazing and even my wife was taken aback by them. And she's never impressed with high-def, much to my chagrin.

While the live-action film isn't as much a musical as Disney's animated effort from years ago, a couple of the film's signature tunes survived. Chief among them is Baloo's interpretation of "Bare Necessities." This song was very much a part of my childhood growing up in the 1970s and I am happy to report that both kids were humming and singing it long after the film finished.

Speaking of Baloo, I would be remiss if I didn't praise the amazing voice work in the film that really brought the CGI animals to life. Bill Murray was perfectly cast as Baloo and it seems like he genuinely enjoyed his work on this which is refreshing from someone who has become less receptive to family entertainment as he's gotten older. Idris Elba as Shere Khan and Ben Kingsley as Bagheera also turn in memorable performances that truly propel this film to a higher plane of existence.

Finally, I have to point out that while the film is very close in spirit to Disney's 1967 animated film, there are several marked departures that I think help to elevate the overall story. If you haven't seen The Jungle Book yet, then these might be light spoilers and you should proceed with caution.

The main theme of Kipling's story is man place among the wild and whether humans and animals can peacefully co-exist. In the original animated film, this theme is watered down in a way that allows Disney to bring up the argument about man's impact on nature without getting too bogged down in the minutiae. At the end, they skate around the impact and settle for an ending that finds Mowgli rejoining his pack in the human village.

In this interpretation, Mowgli is more directly responsible for the destruction of part of the jungle thanks to his introduction of fire (the red flower) at the end with his climatic encounter with Shere Khan. Ultimately, his impact is mitigated thanks to the help of some wise elephants, but at least Favreau is taking a much stronger stand on the impact of man on nature.

Also, I think the new version does a great job of highlighting the strength's of human ingenuity and how it allows them to fit into the existing ecosystem. Mowgli is able to help Baloo maximize his honey procurement and eventually, his "tricks" allow him to survive his fiery confrontation with Shere Khan. Overall, The Jungle Book is a bit darker in places, but by doing so, I believe that they have crafted a more balanced film that will continue to delight audiences for many years to come.

The Jungle Book is now available on DVD and Blu-ray.