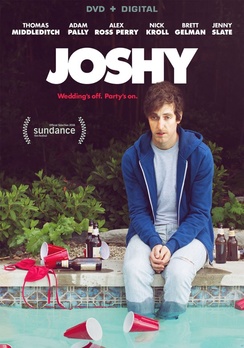 At some point in like a decade or so, we are going to look back on this period of film and really hate upon the Duplass brothers. They, and their mumblecore brethren, have given us so many forgettable films in this whole mumblecore genre that they are starting to blend together.

Joshy is the perfect example of what mumblecore has become. It's a series of films that, much like Chinese food, is enjoyable while consuming, but an hour later they are mostly forgettable. That's not to say that the experience of watching them is any less than other films, it's just that it often feels like these films are on the verge of saying something so poignant and then just end.

Did I enjoy Joshy? Yes, I did. There were parts of the film that were quite inspired. Mostly, the highlight of the film was the strong cast led by Thomas Middleditch, Adam Pally and Nick Kroll. It's pretty obvious that in true mumblecore fashion, they weren't given much in terms of scripted dialog, but rather the actors were free to improvise their lines through various situations.

If you're looking at the cast and thinking that you've seen this film before, you wouldn't be wrong. In Joshy, the would-be wife dies, while in Search Party, Thomas Middleditch's would-be wife leaves him at the altar and goes on their honeymoon. Hijnks ensue in both movies, but it's safe to say that the untimely asphyxiation death in Joshy colors the laughs in that film in a somber tone.

It's not that these type of films aren't capable of elevating themselves above this base level of expectation, it's just rare. Safety Not Guaranteed is a perfect example of a mumblecore film setting itself apart from the others. Another example is About Alex which covers similar territory as Joshy, albeit in a much more serious tone.

If mumblecore is your thing or if you're looking for some smarts in your Hangover, then Joshy is for you. Otherwise, it's a good alternative from those explosions and dead bodies from the Summer's big films that will hit DVD and Blu-ray soon. Either, Joshy more than lives up to its promise.