Review: Jackie Chan still has it in 'Skiptrace' 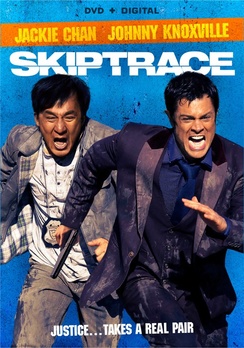 There was a time, not so long ago, in which Jackie Chan was the best action/kung fu star on the planet. Of course, you tend to lose some effectiveness behind your punches and kicks when you hit 60 and do we really want to see a 62-year-old man perform kung fu all over unsuspecting millennials?

It's funny because while Jackie has obviously gotten older, his relentless fighting technique is seemingly unchanged. I would say that it's just a product of good special effects, but I know that Jackie Chan would never fake it in a movie. His authenticity is what helps endear his characters to the audience.

So, the fact that we know that Jackie is actually doing all of his own stunts and performing the amazing feats of kung fu, just makes us appreciate his performance even more. Sure, others have come and gone trying to take Jackie's crown, but none have enjoyed as much staying power as the man who is enjoying his fifth decade in the business.

Back in his heyday, Jackie starred in a series of fish-out-of-water films first with Chris Tucker and then with Owen Wilson. There was about a year of overlap between the two series, but the general story was the same. Jackie's character would have to team with someone as diametrically opposite from him and over the course of the film, they would be able to put aside their differences to punish the bad guys.

Guess what? That tried and true formula is back, but Jackie's reluctant partner this time is Johnny Knoxville. You know, the Jackass guy. I know, it's been a hot minute since he was relevant, but there was a time when his star was about as bright as one's could be in Hollywood. Sadly, Hollywood is a fickle beast, but it sure does believe in second (and third and fourth) chances.

Thankfully, Skiptrace is a film that allows Johnny to play a character that suits his particular comedy style. Of course, it's not much of a departure from the characters that Chris Tucker and Owen Wilson perfected alongside Jackie Chan.

The best part of this film is, of course, the best part of all Jackie Chan movies, the innovative and hilarious kung fu action. There is just something about Jackie Chan that allows him to play the clown prince of kung fu to perfection and it's a role that he seems to improve on with age.

As he's aged, there's been more comedy than action from Jackie, but a strong kung fu fighting cast spearheaded by Bingbing Fan and Svitlana Zavialova really complement his style well. Don't worry, there's still plenty of kung fu action to be had if anything I would say that Skiptrace sacrifices the comedy for a more compelling story.

Unfortunately, it's within these moments that the film gets bogged down and undercuts the effectiveness of the other parts of the film. A few emotional touchstones seems rushed at times, but do you really want to spend more time here in a Jackie Chan movie? Probably not.

At the end of the day, what you expect is what you get and that's not necessarily a bad thing. Jackie Chan is a master of his domain and if you enjoyed the Rush Hour and Shanghai Noon films, then Skiptrace is the next step on this evolutionary arc.