Review: 'Army of One' is one crazy ride 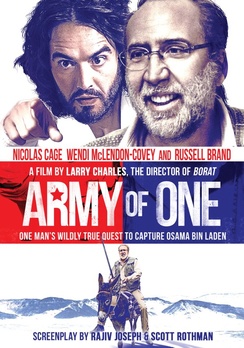 Make no mistake. Gary Faulkner's story is one of the crazier ones that you will ever hear. I remember hearing about it a few years ago and being intrigued, but quickly losing interest and then it got lost in the white noise of life.

What I do recall was that one man had gone over to Pakistan intent on capturing Osama bin Laden and he might have been a little off his rocker. I also sort of remember seeing Gary Faulkner on the late-night talk show circuit and thinking that he was indeed a few bricks short of a load.

Fast forward to this weekend when I popped in Army of One and I got reacquainted with Gary Faulkner and his odd story. Nic Cage is perfectly cast as the would-be Osama bin Laden finder because as we all know Nic is a little off-center himself. Better yet, his style of crazy lines up perfectly with what I assume to be Gary Faulkner's personality.

Interestingly, they bill the film as being mostly true and they seemingly play fast and loose with the facts, but don't let that fool you. The result is a film that captures the spirit of Gary Faulkner and his bizarre story perfectly.

The question then remains, is Army of One worth the investment?

I think that the film has both high and low moments, but ultimately, the resolution of his quest is one that I think is well worth the investment of time. It also helps that they surround Nic with a talented cast that keeps the lulls interesting. In particular, Russell Brand is perfectly cast as God, who is seemingly there to make sure that Gary stays true to his mission despite his many distractions.

Now, granted, I'm not the biggest Russell Brand fan in the world, but I think he does his best work when he's able to let loose and be way off center. And in Army of One, he is so far off center that he makes Morgan Freeman's portrayal of God seem tame by comparison.

One of those many distractions is Gary's rekindled romance with high school classmate Marci. I have to admit that I don't watch The Goldbergs, but I was impressed with Wendi McLendon-Covey's portrayal of Gary's love interest. She and her daughter provide Gary with a humanity that helps to balance his usual craziness and it really helps to ground the film.

Overall, Army of One has more laughs than it should and in today's world, I'll take all of the laughs that I can get.