Review: 'The Wild Life' is anything but 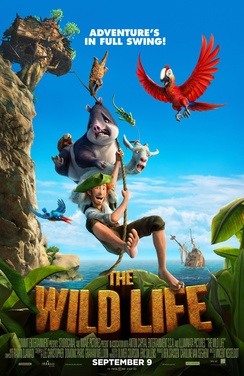 It's not often that I don't find redeeming qualities about even the most absurd movies, but there really isn't much to like about this week's new animated film The Wild Life. The film is a loose (really loose) interpretation of Robinson Crusoe, but really it's just an excuse to provide 90 minutes of animated distraction for your littlest kids.

To that end, my son seemed to really enjoy The Wild Life and found many instances of humor that I just couldn't place. He just turned three years old. My daughter, on the other hand, is almost five and she was quite bored by the film, to the point that she asked if she could do something else about 20 minutes into it.

I think the problem stems from the fact that the film is just too boring for most kids. When you compare it to the very similar Madagascar, the shortcomings of The Wild Life become painfully apparent. Whether it's the fact that film was originally a French/Belgian production and something has been lost in the translation or the idea that kids of a modern society have trouble relating to the idea of shipwrecks, today's audiences are growing tired of this sense of isolation.

That's not really too hard to understand either when you realize that they are instantly connected to a limitless selection of entertainment choices at the touch of a button. For instance, this past weekend, we traveled 10 hours by car and with the help of a couple of iPads, they were kept quite entertained through a plethora of films and games that could change as quickly as their whims.

So, the whole idea of a world in which someone has been isolated to the point where their only form of contact is the fellow animal inhabitants of a deserted island is too much for them to comprehend. Without various catchy songs or other trappings that they have come to expect from other animated films, The Wild Life just seems as much of an anachronistic symbol as the shipwreck that plays out over the course of the film.

That's not to say that it's a complete loss. As I mentioned, my young son seemed to find humor in plenty of spots and watched riveted throughout the entire film. He hasn't yet asked to watch it again, but his enjoyment gives me hope that toddlers under age three might find it more flattering than this jaded old veteran of too many animated films to count. Also, I think the film is geared more towards boys that immediately seemed to put my daughter off.

I realize that the source material involves a man being stranded with his cabin boy or what have you, but couldn't they find a way to work in a few more female characters? I mean, they didn't have a problem writing out that whole unfortunate cannibalism plot point from the original story, so perhaps a bit of progressive writing might have helped to expand the audience a bit.

That being said, there are hints during the credits that if a sequel ever sees the light of day, that they plan to fix that one glaring flaw. Unfortunately, I just don't see the studio having the patience to greenlight another volume in this story as it didn't generate much excitement at all at the box office.