Review: 'Decommissioned' is yet another tired trope 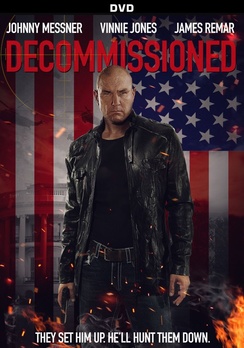 There are certain actors that have a reputation that they have earned after years, nay decades of hard work. These actors enjoy being household names, not necessarily for the quality of work they turn in, but rather the quantity.

I'm talking about the likes of Eric Roberts and Danny Trejo.

One actor that is quickly starting to go down their same rabbit hole is Vinnie Jones. After a promising young career that saw the actor make quite the name for himself in films such as Lock, Stock & Two Smoking Barrels and Gone in 60 Seconds, he is quickly ascending to the lofty (?) heights of the B-list throne.

It was in the 2014 film Throwdown in which, ironically he worked with Trejo, that he met director Timothy Woodward Jr. Timothy Woodward Jr. is a name that you probably don't recognize, but when you realize that even the most rudimentary films out there need a director, then you might come to understand where he fits into the film landscape.

At only 33 years old, Timothy Woodward Jr. is anything but an "old hand," but his directing resumÃ© might make you think otherwise. He's made quite a career for himself by directing these type of lower budget action films that have become quite popular in the age of kiosks where decent box art and an aging action star can go a long way to getting your film seen by a bunch of people.

And this is yet another reason why I terribly miss the heyday of video stores. No clerk in their right mind would recommend 4Got10, Weaponized or Checkmate to their customers, but slick art and a buck can make anyone take a chance.

I also know that Timothy Woodward Jr. is a loyal director that likes to work with the same actors across multiple films. This is usually also a good sign that he's an actor's director and that better things lie ahead for the young man.

Taking Decommissioned into account, for example, you can see how he has evolved and grown as a director in such a short time. He clearly has an eye for action and is able to get the most out of what is almost assuredly little to no budget at all for special effects.

He is precisely the type of director that a studio is going to take a chance on at some point and he will come "out of nowhere" to set Hollywood on fire. The funny thing is that there really is no substitute for hard work and Timothy Woodward Jr. is definitely putting in the hours to hone his craft.

The main problem with Decommissioned is that it suffers from the same fatal flaw that many of these second-tier films fall into. They sacrifice story for special effects and the result is a film that is basically a retread of three or four other films that are superior to this one.

For instance, the whole one-man vigilante story was done to perfection in John Wick. Likewise, the whole father seeks to free his captured family idea hit its peak in the Taken franchise. These lesser films end up being nothing more than pale imitations and it shows.

And yet, I'm inexplicably drawn to them with the hope that this film will finally be the one that truly breaks new ground. Unfortunately, this film is not it.

That's not to say that there's nothing to like about Decommissioned. As I mentioned, the action sequences are handled in a way that is more befitting a film with a much larger budget. Also, Decommissioned answers the question, "whatever happened to Estella Warren?"

Estella seemed to have a promising career ahead of her when she exploded onto the scene in the early 2000s, but she went MIA for almost a decade. In Decommissioned, she plays the kidnapped wife of a retired CIA agent with much aplomb and makes me curious to see if she will get another shot to bring her acting chops to a more mainstream film.

At the end of the day, Decommissioned is one of those "dime a dozen" films that you will soon find littered in the bargain DVD bin for three bucks. For that price, the film is worth the investment. As I mentioned, the story is worn a bit thin and the acting is stiff to say the least, but there is merit to the directing choices made and perhaps this will finally be the film that gets Timothy Woodward Jr. the notice that he deserves.