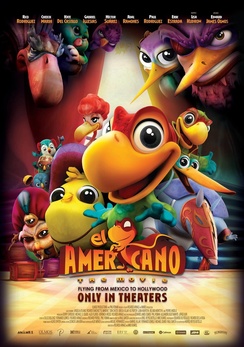 You know, I think the proliferation of animated children's movies has reached epidemic levels. I mean, as the father to a pair of kids under six years older, I'm not complaining (too much), but the sheer number of animated fare has skyrocketed in the last decade.

Think about it. We used to simply refer to them as animated films (or cartoons if you're as old as I am), but now that's not nearly specific enough in most casual pop culture conversations. You have to be more specific. "My favorite Pixar film is..." "The worst post-traditional animation Disney film is..." "Here are my top five animated films starring birds..."

You might think that last one is pure hyperbole, but let's think about it for a minute. You've got Rio and Rio 2. The Angry Birds, Storks, Chicken Little and Free Birds. Oh, and you can't forget Chicken Run and Penguins of Madagascar (flightless birds totally count - oh, and since they do Happy Feet and Happy Feet 2).

Whew. And that doesn't even count films where birds were major supporting characters like Bolt. The point is that the animated birds' subgenre has become quite packed lately, so when I took a look at Americano, my first response was 'gee, another bird movie."

Thankfully, I'm not one to simply rely on my first impression, as they are often wrong. Spoiler alert: it was wrong with Americano.

It seems Latin American culture is getting quite the animated treatment this year between Americano and Pixar's Coco (coming out in November) and it's about time. The culture and history is one that not only lends itself to the color and celebration that animation excels in, but the stories resonate with a larger population as a whole. Over the past few years, studios have had numerous success stories at the box office with Spanish-language films, so it was only a matter time for this culture to trickle down to the animated world.

Americano is the type of film that kids of all ages can enjoy. Sure, it follows a rather safe hero's journey, but there are real messages at play that translate well to the audience. Sadly, it seems that we live in an era where our heroes tend not to hold up to increased scrutiny. In a small way, Americano is able to convey this concept to a younger audience and provide the basis for a much more difficult conversation that we will have to have with our kids when their heroes eventually turn out to not be the idealized version of themselves that we placed on pedestals.

The biggest compliment that I can give Americano is that my children have already watched it at least three times in the last week and they are obsessed with the crazy antics that Cuco and his friends get into. Many times, secondary animated films skimp on the story for whatever reason, but all that does is create a film that isn't very memorable and that is the kiss of death for an animated film.