When Disney shelled out $4 billion for LucasFilm, we were shocked and awed. A mere six years later (Really? Has it only been six years?), those of us who grew up on Star Wars are fortunate to live in a world that was beyond our imaginations even as kids.

Disney has taken the Star Wars franchise and grown it to a level that it rivals its other big franchise, the Marvel Cinematic Universe, as the biggest and best entertainment franchise in existence. What was simply six films (and a treasure trove of peripherals and expanded universe offerings) has grown into a multi-platform franchise with targeted offerings based on any myriad of factors.

Until Disney took over the reins, it was relatively simple to be a die-hard Star Wars, but since the acquisition, I posit that it is nearly impossible to consume every single Star Wars thing that Disney is bringing to the marketplace. And that's OK. What Disney has done is to break the franchise up and offer strong films with darker tones for the older audience that grew up on the original films, while also providing a new generation of fans an entry point to explore Star Wars from their own perspective.

Lego Star Wars: The Freemaker Adventures is one such entry point for younger fans to become entrenched in the franchise. Of course, Disney is hoping that young fans will grow with the franchise and discover it as they get older. This is a brilliant strategy and one that is difficult to pull off if you don't have the resources that Disney has lying around.

You know have to look as far as the prequels to see how difficult it is to try and offer something for younger fans while also placating older fans at the same time. Disney has taken George Lucas' vision and raised it to levels that not even he may have foreseen.

Lego Star Wars: The Freemaker Adventures is a perfect series for my son and me to enjoy together. Obviously, he is more in the target demo than I am, but I relish the opportunity to share beloved characters such as Lando Calrissian with him and reliving my childhood through his eyes. What is interesting is that he is developing a passion for these new characters in a way that will only serve him if he decides to continue along the path to Star Wars nerddom.

Much like its successful predecessor Star Wars Rebels, The Freemaker Adventures is able to weave their tales around the fabric of existing characters and stories. With the stated goal of releasing a new Star Wars film every year for the foreseeable future, these threads are going to the ones that bind the entire franchise together.

Whether it's the Forces of Destiny line geared to highlight the strong female characters in the franchise or the various new comic book titles, the goal remains the same: to deliver a high-quality Star Wars experience. The Freemaker Adventures has firmly established itself as a valuable cog in this machine and as my son can attest, it is working.

Lego Star Wars: The Freemaker Adventures is now available on DVD. The five bonus shorts that served as a bridge between the seasons is included as is a really cool Darth Vader pin that my son refuses to take off. 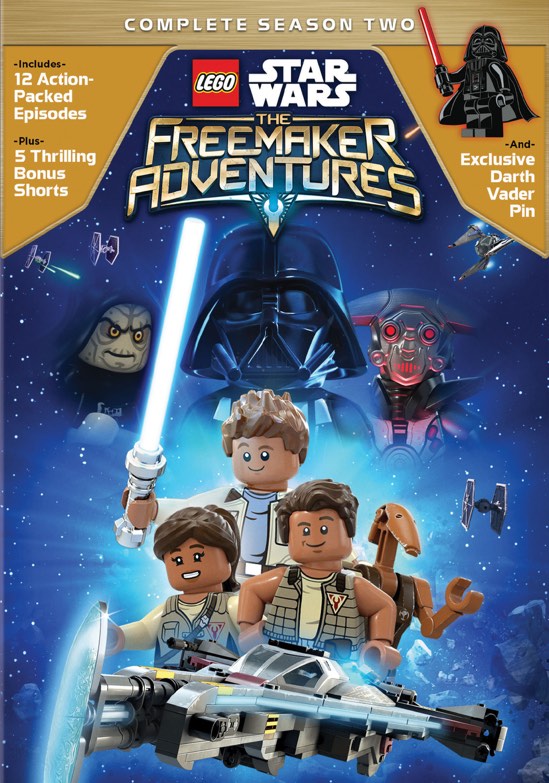