Disney is creating a bit of a cottage industry when it comes to high school musical films. It started with the High School Musical films before they expanded the genre with their intellectual properties in the Descendants films. Now, Disney is stepping out of their comfort zone by introducing Zombies to the mix.

Yes, you read that right. The king of family-family entertainment is dipping its toe into the horror mainstay zombies with its latest high school musical film. Don't worry, it's Disney, so the Zombies are mostly neutered and their penchant for eating brains is only mentioned in passing.

Despite introducing a novel concept (for them) to this film, they didn't really re-invent the wheel when it comes to their highly successful musical films. In fact, they clearly tout the involvement of the "braaaains" (ha!?) behind the Descendants films. What is interesting is that Zombies is based on a pilot that Disney passed on in 2012 called "Zombies and Cheerleaders." I guess everything old truly is new again.

In Zombies, zombies and humans have been segregated, but recently they started intermingling to an extent at Seabrook high school. Zed (get it? Zed for zombie), the zombie has the dream of playing football on the all-human football team while Addison is a human girl with her own secret who takes a shine to Zed (A to Z, it's like it was intentional). The result is a retelling of Romeo and Juliet or West Side Story or Grease depending on your generation.

If your kids were obsessed with Descendants, then they will also love Zombies. It seems that zombies are now ubiquitous in our society (thanks Walking Dead) as evidenced by the fact that my four and six-year-old kids can tell you in detail everything that you wanted to know about them. While it's a bit off-putting that they have been exposed to this horror film trapping, I suppose if they are getting the Disney treatment, then they are here to stay for kids of all ages.

The film is pretty harmless and as I mentioned they treat the zombie stuff with kid gloves that shouldn't lead to any awkward conversations with your own children. My kids loved Zombies as they are really into the singing and dancing of musicals these days. As someone who also has an infinity for musicals but was never exposed to them as a child, I am thankful that they are getting exposed to song and dance from a young age.

Another feather in Zombies' cap is that they seem to tackle heavy issues such as diversity and discrimination in a way that doesn't come off as preachy. Whether it's zombie or racial or gender equality, the struggle is real and Zombies does its part to conveying these issues in a way that kids can understand. My own children are still young enough that they haven't had any direct exposure to bigotry, but when they do, it will help to have Zombies upon which to draw parallels.

While the songs and overall production value isn't quite up to snuff to the Descendants or High School Musical films, they do hold up to repeat viewings. The filmmakers made a very conscious effort to feature pink and green neon hues prominently and it works as the austere high school transforms over the course of the film.

Again, this film is a risky gamble from Disney which is known for playing it safe as much as possible, but it works. As an adult that has seen many zombie films over the years, it felt very much like Fido meets Warm Bodies meets High School Musical. Like I said, it's a different Disney film with a distinctive style, but the result is a memorable movie experience for the whole family.

Zombies is now availble on DVD. 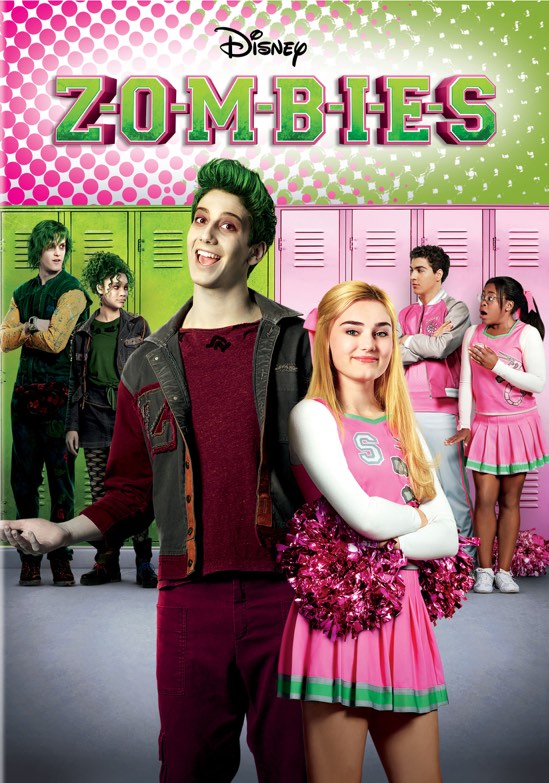