Review: 'The Super' isn't all that super 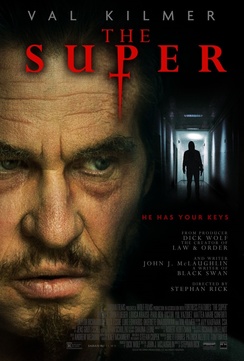 I get it. Val Kilmer is a rather polarizing actor. You either like him or you don't, there really is little middle ground there. I tend to be someone who finds themselves on Team Val more often than not, but I can understand those on the other side of the fence.

The good news for both crowds is that Val Kilmer is very compelling as a creepy old janitor in The Super and his screen time is quite limited. While the role really is something more akin to a glorified cameo, Kilmer makes good use of his diminished screen time to add several of the best bits to the film.

Unfortunately, not even a winning performance from Val Kilmer could save this doomed movie.

An ex-cop is struggling in the role of a single father after his wife dies in a fire that he and his two daughters survive. In an attempt to spend more time with his daughters, he takes a job as a super in an old Manhattan apartment building. There's more going on in the building than meets the eye as residents start disappearing the new super must rely on his old cop instincts to save his family and solve the mystery.

Sounds good, right? The trailer looks interesting, no? Sadly, this is about as good as it gets for the tired and clichÃ©d The Super. The failures really boil down to the creative side of things because the story gets lost several times before revealing a bonkers twist that would even make M. Night Shyamalan's head spin.

What's really bizarre though is that the writer of The Super is the same scribe who penned the spectacular Black Swan. All of the psychological anguish of that film is instead replaced by sordid supernatural and real-world elements that don't quite mesh with the rest of the movie.

Of course, this won't be breaking news for the filmmakers as large chunks of the third act have dialog dubbed in that doesn't even come close to matching the actors' mouths. It was like watching a bad 1970s kung fu movie in which the intentional bad dubbing is almost a badge of honor. There is no award for this sloppy film work though as it simply appears that they went back and completely changed significant pieces of dialog, but instead of reshooting the scenes to match up, they just hoped that no one would notice.

As mentioned, Val Kilmer is quite effective as the creepy old man and the rest of the cast is up to snuff, but the story simply isn't there to support their efforts. There's a large TV acting contingent in the cast and Patrick John Flueger as the ex-cop turned super and Paul Ben-Victor and Yul Vazquez as his colleagues stand out from the bunch and deserve a better fate.

The young actresses playing his daughters also provide more than just a standard cardboard cutout, but again, the film just doesn't deliver when it matters most. I get it, we live in a post-Sixth Sense world where everyone feels as though they need to outsmart the audience. Unfortunately, there's a reason that such tomfoolery rarely pays off and that's mostly due to the fact that such moves require a hefty amount of forethought. Simply coming up with an idea after the fact and dubbing in some audio isn't going to cut it.

All that said, your mileage may vary. The Super is equal parts horror and mystery thriller, but not very good at either. The filmmakers do create a certain isolationist atmosphere which is tough to do at the heart of a megacity such as New York. The building becomes a tangible character in the film that really should have been explored more instead of the nonsense that ultimately brings the film to a conclusion.

The Super is now available on Blu-ray and DVD.