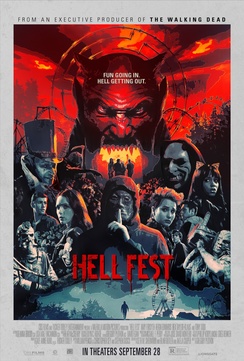 When all of the big horror films hit theaters in October for Halloween, it means that we get a nice little January fright fest on home entertainment. If you're a fan of blood, guts, and gore, then this month will provide plenty. Unfortunately, they aren't all as satisfying as promised.

Next week's Halloween is the brass ring this month, but this week's Hell Fest is an appetizer that might provide just enough scares to get you into the spirit for next week's main event. I remember reading about a real event that happened here in Tennessee last October and I thought it must have been a poorly executed marketing gimmick for this film.

At one of these massive Halloween complexes that always spring up around here in October, someone was stabbed when a real knife was snuck into the complex. Apparently, the person who snuck the knife in gave it to a stranger and told her to stab her friend. Thinking that it was a prop, she did so. Copious amounts of blood and stitches later, the prank seemed like something straight out of a film. Hell Fest, to be exact.

Hell Fest follows a group of unsuspecting college-aged kids who decide to check out a horror-themed event at a local amusement park dubbed Hell Fest. The event includes mazes, haunted houses and just about everything you'd expect to scare your socks off. For one visitor though, Hell Fest is the ultimate playground where he can exercise his very real serial killer tendencies under the camouflage of his blood-soaked surroundings.

The concept behind this film, much like when I read about that real-life horror complex stabbing is quite intriguing. I think the more compelling story though is to delve in the psyche of the person who would look at a horror event and think of it as his own personal playground.

Hell Fest takes the opposite approach, insisting on creating another played out slasher film instead of making it something truly unique. They even waste the always formidable Tony Todd in a cameo that could have been so much more. In terms of suspense and horror, Hell Fest proves itself quite capable, but the killer is nothing more than an unformed idea. The true horror is found much deeper. Imagine if this idea had gone the same route as Get Out. Now, there's a film that I would be dying to see.

The frights in Hell Fest might hold the attention of a horror newbie, but for the experienced horror fan, it will be a case of "been there, seen that." The movie is certainly more polished than others in its genre even if it does adhere to the tried and true maxim of featuring a cast of pretty no-name actors. Of course, the story doesn't allow for any sort of character development, so we are stuck with a bunch of one-dimensional characters. The lack of investment in their fates ultimately undermines the effectiveness of the suspense and we are left with a moderate amount of gore that doesn't really break much new ground in the genre.

Naturally, not ever genre film can reinvent the status quo, but the recent hits in the horror genre have proven that these films can and should push the boundaries of the envelope. Without reinvention, we get films like Hell Fest that ends up being little more than a retread of any number of movies that have come out in the past year with small tweaks here and there.

Your mileage may vary, but I'm going to hold out a week and get the good stuff next week when Halloween makes its long-awaited home entertainment debut. Hell Fest is now available on 4K UHD, Blu-ray and DVD.