Review: Stallone's 'Lock Up' gets paroled onto 4K 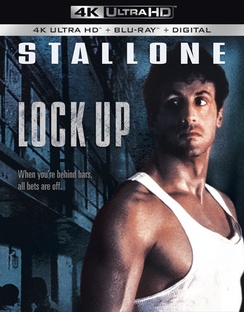 Look, no one is going to argue that Sylvester Stallone's 1989 film Lock Up will ever be confused with Citizen Kane. Let's be honest, it earned those three Razzie nominations. I'm just surprised that it didn't win a single one.

And yet, this period of Stallone's is a fun one. It's almost like you can see the actor trying to break out of his typecast and show some of the range that he'd later display in Creed. That and my Dad was a massive fan of Stallone during this time, so there's a lot of memories wrapped up in these bad movies.

In Lock Up, Sylvester Stallone's Leone is serving the last few months of a prison sentence in a minimum-security prison just looking to do his time, but Donald Sutherland's Warden Drumgoole has other plans. The Warden absconds Leone to his maximum-security prison under the secrecy of darkness and is determined to get revenge for an earlier beef. Now, Leone will be tested just to survive until his sentence runs out.

I mean, the suspension of disbelief is really out there on this one in such a way that only 1980s films can get away with. I'm pretty sure even then it would be pretty impossible to kidnap an inmate in the middle of the night and put him in your prison on a whim. But hey, it's Donald Sutherland so don't ruin the film with questions.

That said, Lock Up rolls out all of the prison clichÃ©s and more than a few of them are cringe-worthy when looking back today. Apparently, there was a time when the death toll from prison football games outnumbered the number of sparkly vampire movies released each year. Why does every prison movie of a certain era have this requisite football scene? And yes, I know it's because of The Longest Yard, but it's time to put that one to bed.

Sylvester Stallone seems game to make this film into a more dramatic attempt, but the writing just isn't there. It's pretty much an A,B,C prison film replete with dirty guards and a wayward warden. It's a poor man's Shawshank Redemption without any of the stuff that made the original film so good. Sorry Tom Sizemore but you are no Morgan Freeman.

The real tragedy here though is Donald Sutherland. He was such a force in film but Lock Up represents one of the weaker offerings on his resumÃ©. I'm not real sure what he was thinking in some of these scenes, but the role had the potential for Sutherland to turn it into something special, but instead he spends most of this screen time creepily staring at Sylvester Stallone.

Given that the film is hitting 4K UHD, it's only right that we talk about the enhancements. The Dolby Vision transfer does a decent job cleaning up the frame, but there's only so much that you can do with film from this time period. The scenes in the prison yard seem to show the most gain and actually look really good. Oddly, the darker scenes don't seem to gain that same bounce.

Lionsgate opted not to include a Dolby Atmos audio track on this one and its omission is clearly felt. While the film isn't the most chaotic action movie, there are several sequences that would have been better served with the newer technology. As it stands, the audio feels flat in certain spots and knowing what the Atmos track could have added makes me long for it, but I doubt we will ever see it.

At the end of the day, this isn't the best Sylvester Stallone film out there, but with Rambo: Last Blood hitting theaters in a couple of weeks, the studio's rationale for releasing it makes perfect sense. While they are hoping to cash in on the Stallone, they hope you won't notice all of the flaws that still seap into the 4K UHD offering.

But, there is something fun about this film and I can't watch it without thinking of my Dad, so there's that. Nostalgia comes in all shapes and sizes and if Lock Up does it for you, it's now available on 4K UHD.