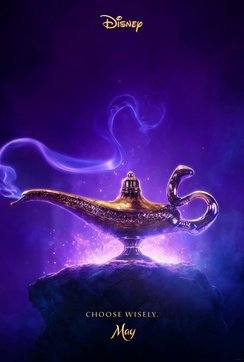 I fully admit that I went into this review intent on hate-watching this movie to an inch of its life, but something interesting happened along the way. I fell in love with Aladdin all over again.

Whether it was the updated story elements or the ever-charming Will Smith tip-toeing the line between reverence to Robin Williams and making the Genie his own character, but there is something undeniably heart-warming about the live-action version of Aladdin that it earns all its own.

The live-action version of Aladdin doesn't stray too far from the animated classic that preceded, but it's in these slight adjustments that Aladdin proves to be a classic in its own right. The lovable street rat is brought to life by upcoming actor Mena Massoud and his relative scarcity in the film world allows Will Smith to breathe life into the Genie in much the same way as Robin Williams did in the original film. Armed with his very own Genie, Aladdin returns to Agrabah with hopes of winning the heart of the forward-thinking Princess Jasmine, played brilliantly by Naomi Scott, who is poised for a breakout in her own right.

I'm not lying, I hated everything about this movie before I watched a single frame and it only goes to show that the old adage about judging a book by its cover is still relevant. Disney did a great job of updating certain aspects while maintaining the spirit and fun of the animated original.

One of the main improvements in my mind was with Princess Jasmine. While she was certainly outspoken in the original movie, Naomi Scott takes it up a notch with performance giving the young girls in the audience a new hero. As the father of a young daughter, I'm hyper-vigilant about the portrayal of women in films these days and I was relieved that they didn't decide to make Jasmine more subservient or traditional.

The performances from Mena Massoud and Naomi Scott took the pressure off Will Smith because let's face it, he was never going to fill Robin Williams' Genie slippers. In the original film, the complete focus was on the Genie and rightfully so, Robin Williams was a genius and his manic style was perfect for the animated film. That said, Robin Williams would have been a terrible choice as a live-action version of the character.

There's just something about the animation that suits Robin's style to a 'T.' The live-action Genie needed to carry a certain amount of suave debonair that Will Smith has in spades. For his portrayal, Smith toned down the craziness and actually gave the Genie a certain attractiveness that also made for a fun little addition to the new film.

Of course, you don't have to look far to see the hate for this film. It's currently rotten on Rotten Tomatoes as it seems that most critics either don't have a family or came in with the same preconceived notions that I had and refused to be sucked in by the movie. It's a shame because it's currently rated as 94% with the general public, so there's definitely a disconnect there.

If you go into the film with an open mind, I believe that you will be pleasantly surprised by how much you will enjoy it. Had the animated film never existed, we would be talking about how amazing the live-action film is, but I get it, we don't live in a vacuum.

That said, there is room for both of these movies to co-exist and complement each other. As I said in the earlier review for the animated version, my kids love that version, but they also embraced the new one as well. In their world, they accept both films for what they are and they love different aspects of each.

The funny thing is that both films take advantage of their medium to create a unique take on a familiar tale. The only thing preventing us from embracing this new film is our preconceived notions, but perhaps with some nudging, you'll give it a try. I guarantee that you will love it.

Aladdin is now available on 4K UHD, Blu-ray and DVD.