Review: 'The Peanut Butter Falcon' is a clear winner 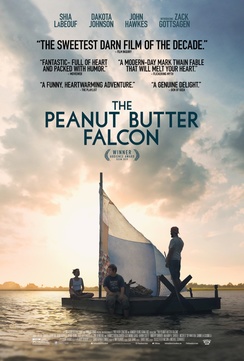 If you took all of the parts of The Peanut Butter Falcon separately and tried to convince someone to watch it, you would fail miserably. Let's be honest, very few people would get past the funny title and the fact that it stars Shia LaBeouf.

Let's face it, for, well, numerous reasons, LaBeouf isn't what you'd call a bankable Hollywood talent these days. After such a promising start, he was a victim of the child actor curse and served many demons these past few years. And yet, the 33-year-old actor (yes, he's only 33) still has a long life of potential Hollywood hits ahead of him and The Peanut Butter Falcon is certainly a step in the right direction. Whether it will become his Pulp Fiction only time will tell.

The Peanut Butter Falcon is the story of Zak, a young man with Down syndrome, who dreams of attending his hero's pro wrestling hero. The only catch is that he's stuck in a residential nursing home. With help from his roommate, Zak escapes one night and he begins his journey to fulfill his dream. Along the way, Zak meets up with a small-time outlaw and the unlikely pair form a kinship that changes both of them.

I can't believe that I'm typing these words, but I would not be shocked to see Shia LaBeouf score an Oscar nomination for his performance as Tyler. Yep, I just went there. The Best Actor category is traditionally a very competitive field, so I do think that the odds are low, but I wouldn't be surprised. That's how good he is in The Peanut Butter Falcon and how much he's turned his life around since he rented out a theater for a live performance art piece where he watched all of his films back-to-back without a break.

The other breakout performance is Zack Gottsagen in his debut role as Zak. Unfortunately, not many roles are written for people with Down syndrome and Zack's performance underscores how criminal this is. He is not only a good Down actor, but he is a gifted actor without designation and he should definitely be allotted more roles in the future. He is quite literally the heart of the film and on-camera for 95% of the movie and his expertise of the craft is evident in every single frame.

Finally, I'm also a bit humbled to sing the praises of Dakota Johnson who had seemingly let her good start get tarnished by the leading role in a slew of Fifty Shades films. Given her lineage, we knew that she'd excel in provocative roles, but it's her reserved and timid performance here that really hints at the brilliance lurking below all of the skin that she's not shy about exposing. It was a refreshing change of pace from Dakota and I am excited about what the future holds for her.

Let's be honest, the fact that this film got made at all is pretty remarkable. While the passion of the filmmakers was undeniable, there were a lot of risks involved in The Peanut Butter Falcon and I would be remiss if I didn't point out the wonderful bonus featurette "Zack's Story: The Making of Peanut Butter Falcon." It is both eye-opening and a perfect example of how bonus features should help to continue the discourse of the film.

The inclusion of test footage shot to prove to the money people that Zack could indeed carry the acting responsibilities is amazing. Of course, there wasn't much the filmmakers could do about convincing the studio that Shia LaBeouf wouldn't flip out half-way through filming, but I think it's safe to say that all of the risks have paid off handsomely.

The film is being touted as a modern-day Mark Twain tale and I get why people make the easy comparison, but that's also selling The Peanut Butter Falcon short. It's more complex and wonderful and it also touts all of the wonderful advantages of telling a story in this medium. It not only tugs at the heartstrings, but it really builds a family with the audience and that is the movie's true high point.

As a viewer, you become personally invested in Zak and his journey. You feel compassion for Tyler and the hard life that he has led and the emotional void that Eleanor (Dakota Johnson's character) has in her life. These three unlikely characters not only form a bond with each, but they reach out from the screen and include you in their embrace. And it's a warm embrace that is very easy to return.

The Peanut Butter Falcon is now available on Blu-ray and DVD.